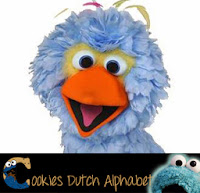 …Pino! He is Big Bird’s cousin living on the Dutch side of Sesame Street. Pino is also a very big bird, with gorgeous blue feathers and a great, sweet personality. Me sometimes visit him at his nest. Also starting with p is poppenkast (a puppet show at a puppet theatre). It is a children’s puppet show with old fashioned hand puppets with people hiding inside this wooden cabinet with a window in it. Jan Klaassen and Katrijn are the most famous hand puppets. There are often shows to see at the park, like a pretpark (amusement park) like the Efteling or other nice amusement parks in the Netherlands. 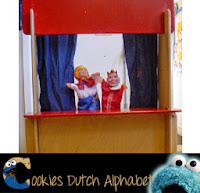 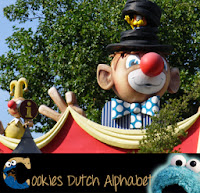 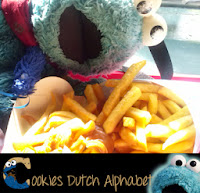 At a pretpark – but also at normal parks, the zoo and in the city, they like to serve patat (fries). Mostly served with mayonnaise or ketchup. Om nom nom nom! Also really Dutch are pannenkoeken (pancakes). These are different from the American breakfast pancakes and can be compared more to crepes. The Dutch like to eat theirs with syrup, sliced apples, raisins, bananas, chocolate, cheese, onions, meat… well almost everything! More traditional are poffertjes (Dutch baby pancakes). Mostly served with a little lump of butter and some powdered sugar… Oooo me mouth is watering! 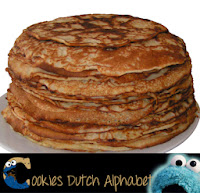 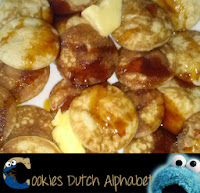 Pannenkoeken / Poffertjes
Above: patat at the Efteling 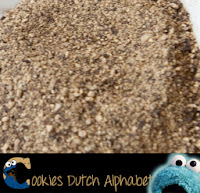 Not really Dutch but it is used much in Dutch dishes is peper (pepper). Also they like to eat a lot of pepermunt (peppermint) here. The Wilhelmina pepermunt is very famous. It looks like a coin with the portrait of the late Queen Wilhelmina on it. There is no pepper in the peppermint though. It got its name for the sharp taste. Just like there is no pepper in pepernoten. A Dutch treat that is eaten during the party of Sinterklaas. The Dutch have two kinds, one is more spongey – those are the real pepernoten – and the other taste like speculaas cookies and really need to be called kruidnoten (herb cookies). Both are thrown through the room though by Black Peter (Zwarte Piet, me will tell more about this wonderful fairytale being when the letter Z comes around), Sinterklaas his loyal helper. Like Santa’s elves. 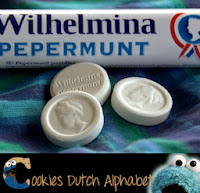 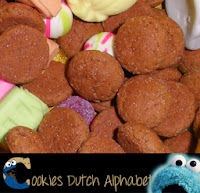 Wilhelmina Pepermunt / Pepernoten (the cookie kind) with some Sinterklaas candies
Above: Peper 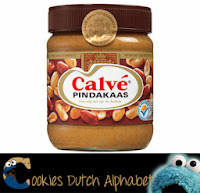 You know what is loved all over the world but also very much in the Netherlands? Pindakaas (peanut butter)! The best sandwich is made out of white bread spread with a nice layer of yummy pindakaas. Especially the smooth Calvé brand. They have such a nice marketing slogan: Calvé Pindakaas, wie is er niet groot mee geworden? Translated: Calvé Peanut Butter, who hasn’t grown up with it? Well, me know a lot of people did! Me? Well me love peanut butter cookies ofcourse. 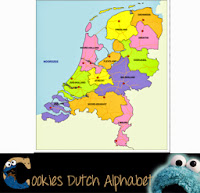 To conclude the letter P me will talk about how the country of the Netherlands is divided in different provincies (provinces of states). There are 12 different provinces: Groningen, Friesland, Drenthe, Overijssel, Gelderland, Limburg, Noord-Brabant, Flevoland, Utrecht, Zeeland, Zuid-Holland and Noord-Holland. Each have their own main city and government, but the whole country is led by the politicians in The Hague. It is very complicated for this little monster. But me just wanted to show that this little country is divided into 12 parts.

Well that concludes the letter P. A little later than me promised, but hey, it is here now! To get back on track me will post the fascinating letter Q tomorrow. Fascinating…because me really do not know what to do with the letter Q!