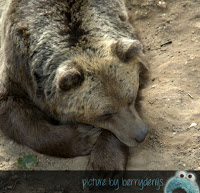 Hey everybody. After the vacation blog madness me is back again with some other stuff. Boy o boy are we spoiled with a beautiful Indian Summer. It really was a heatwave out here. Me no mind though. It perfect weather to go outside. On September 2nd Berry took the day off so we could go to Ouwehands Dierenpark (Ouwehands Zoo) in Rhenen, the Netherlands. Me have been to that zoo before, and last year me told about in a blog called Have me told about… Ouwehands Dierenpark?. Me reserved a big part of that blog to talk about the Bear Forest. Me tell you this, because this time our visit was focussed on the Bear Forest too. You see… they just opened a new exhibit room and Berry wanted to blog about it on her website. (pictures all taken by Berry de Nijs)

Observation post
New at the zoo is the Observation post. A little cabin that tells an important story about bears, showing skins, skulls, a wall full of black and white pictures and a showcase displaying old knives. There are old suitcases, as if someone was living there and a desk. The cabin has one wall made out of glass, zo real scientists, zoo keepers and visitors can observe the bears in their habitat. During our visit we could see two Malaysian bears frolicking around. It was fun. Me and Berry love bears and the exhibit is very educational. And a little emotional too… 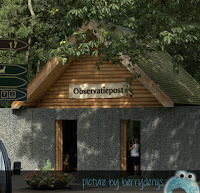 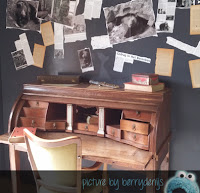 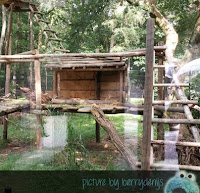 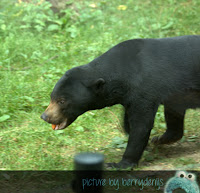 Mackenzie, the brown bear
You see, there were these big glass showcases in the cabin. One of them had a skeleton standing in it that used to be from a bear that had passed away this year. The bear was one of the first bears to live in the Bear Forest. He was a real special bear. That is why the zoo wants to keep him close. Not only his skeleton was on display, in another showcase made of glass he sits as a taxidermy bear. He looked like a sweet big old teddy bear, with his glistening eyes and beautiful fluffy bear fur. Berry got a little misty eyed seeing the bear sitting there. She is not fond of taxidermy you know. Softly me heard her whisper: ‘Hi Mackenzie, are you comfy sitting there?’ Mackenzie was a very handsome bear and she even took a picture of me with him. It was hard though, because of all the reflection from the window, but me glad we did. 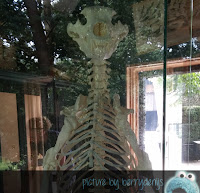 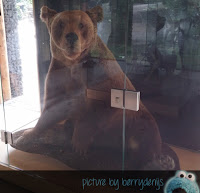 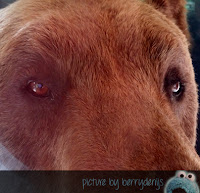 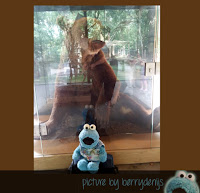 Strolling through the Forest
We also went to the Bear Forest to look at the wonderful bears that live in it. Because of the beautiful weather, they were out and about, taking a stroll, taking a nap or playing in the water. We could stay and watch them for hours, but we really wanted to visit the polar bears, tiger, lions and all other animals too. 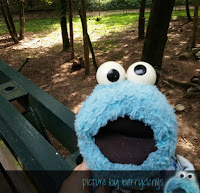 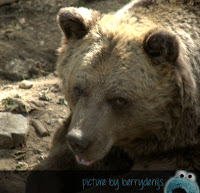 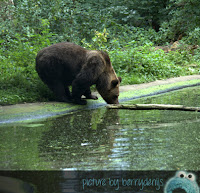 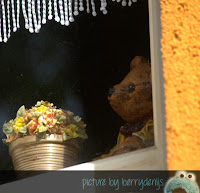 A new friend
At the end of the day before we went home Berry decided to adopt a new friend: a little brown bear. Me Instafriends already met him. When we were cuddling on the way home in the car me whispered: ‘Hey Mackenzie, are you comfy sitting there?’ He looked up, nodded and crawled in me paws ever so tightly. So we adopted our own Mackenzie. He is the best brown bear and you know what? Because Berry adopted him the money she paid for him goes to the Bear Forest Foundation, so more bears like the real Mackenzie can have a safe, easy and abuse-free life! 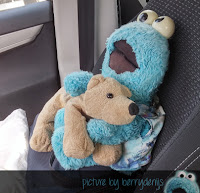 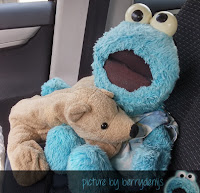 Email ThisBlogThis!Share to TwitterShare to FacebookShare to Pinterest
Labels: Animals, At the Zoo, Coo-kie!, Fuzzy and Sweet, Little Friend(z), Playing Outside, Summer Holiday, Travelling Around

We met on Instagram but don't want to leave the wonderful blog here without leaving a comment!

Thanks for sharing this adventures with us, dear friends - we really enjoyed it!

Yay we found you! What a great blog, we're totally following from now on!! xox

Hi Cookie. I love how you are hugging your new friend at the way back home. I'm so happy for you! I featured your blog on my blog if it's ok, because I love it so much. Hugs, your buddy SiD x

Hiya SiD
Ofcourse it is okay to feature me blog on yours! Thank you!
Big hugs
Cookie